“The bell master holds and protects the space for everyone.”

How to Invite the Bell (by SnowFlower practioners)

What helps me is to very much center in my body as I recite the gatha and to be aware of the connection between myself and the bell. I feel the bell and myself are one.

Inviting the bell is like meditating. I don’t recite a gatha because I am not a word person. I first come into a focus place of concentration and then a wide place of opening the heart. Both of these are in the chest.  I am not really me at that point any more. From that openness, I invite the bell.

I get quiet inside myself and I allow myself to feel the texture of the bell. I feel my breath moving in and out and I say the gatha to myself slowly and calmly. When I don’t take my time, it gets kind of messy. Then, I invite the bell.

I hold the bell in my left hand, fingers spread apart. I approach it with compassion, with love, and try to imagine, to hear in my head, the sound that I hope to produce. Then I wake it very carefully. I start by holding the inviter against the rim where I intend to invite it and then carefully return to that place.

First, I breathe at least three times in and out and then I say the gatha and I think about –in the sense of I just know –how important the sound of the bell is. Then I bow and I pick up the bell in a mindful way. I hold the inviter vertically. I breathe again and then wake it up. I breathe. I invite it and then I let it ring out. I put it down very carefully

Body, speech and mind in perfect oneness,
I send my heart along with the sound of the bell.
May the hearers awaken from forgetfulness,
And transcend all anxiety and sorrow.

Listen, listen, this wonderful sound
Brings me back to my true self.

Stopped bell — All bells during reciting and chanting are stopped bells, to facilitate the flow of the recitation.   The bell should not continue to sound under our words. The bell is “stopped” by touching the inviter to the rim of the bell after an appropriate length of time, e.g. one, two, or three breaths, depending on the text.  “Stop” the bell during a Guided Meditation and during the recitation of Sutras, Mindfulness Trainings, and, generally, wherever (bell) is indicated in the text.

Inviting the bell – We say ‘invite’ the bell, meaning invite the bell to sound. The bells we use cannot be ‘rung’ and Thay explains that ‘striking’ the bell is too harsh a term. “We never say ‘strike’ the bell, because for us the bell is a friend who can wake us up to full understanding.”

Wake up the bell, then one full sound of the bell.  Making this full sound is called inviting the bell.

After an appropriate length of time, the fourth invitation of the bell announces the end of the meditation and indicates that we should continue walking until we arrive at our place, where we remain standing until everyone else has also arrived at their place. At the last invitation of the bell, we bow to one another and take our seats for the next round of sitting.

When the group is too large for one circle, two concentric circles are formed. In that case, with the 4th invitation of the bell the walking stops and we remain standing in place where we are. The bell is invited one last time and at this invitation we bow to one another and proceed mindfully to our places. It is not necessary to explain “the five bells” for walking meditation unless there are new people present. It may, however, be necessary to announce whether one or two circles will be formed.

The person leading should take a few minutes before beginning the guided meditation to explain what will take place.  Then s/he makes a waking-up sound on the rim of the bell   to draw the attention of the community.  After a few seconds, the first guiding sentences are read, followed by the key words. A full sound of the bell, which is stopped after a few breaths, signals the practice stage.

For a simple recitation of the Trainings, the facilitator first invites the bell three times. After each Training has been recited, the facilitator should wait three, four, or five breaths to allow the words to fully enter our being. After this silent period, a bell is invited and stopped, to indicate that it is time for the next training to be recited. The bell is invited twice after the last Training.

After announcements, SnowFlower Sangha closes by holding hands in a circle. Generally, this is preceded by one (waked) lingering bell.

Closing as done at Plum Village and at regional retreats: using small bell, one bell to stand, one to bow to each other and then one bell to bow to the altar. 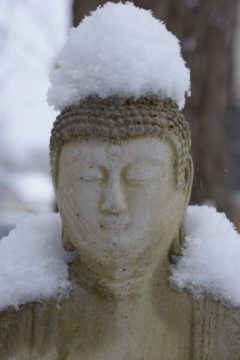 To receive SnowFlower emails, please sign up for our Google Group by sending an email to snowflower-sangha+subscribe@googlegroups.com.

Our Body Doesn’t Lie a dharma talk by Lisa Gleuck Early on, I’d sit on my zafu and soar freely through space. (At least on a good day.) Lovely wordlessness: no boundaries, no worries, and no stress.  The trouble was,…
END_OF_DOCUMENT_TOKEN_TO_BE_REPLACED

Statement by SnowFlower Sangha on Racial Injustice As a sangha practicing in the tradition of Thich Nhat Hanh, SnowFlower Sangha mourns the murders of George Floyd, Breonna Taylor, Ahmaud Arbery and countless other victims of the confluence of racism and…
END_OF_DOCUMENT_TOKEN_TO_BE_REPLACED

Update on Statement by SnowFlower Sangha on Racial Injustice For many SnowFlower members, Thich Nhat Hanh’s Engaged Buddhism is what drew them to this sangha. Aware of the disproportionate number of people of color in Wisconsin prisons, for over a…
END_OF_DOCUMENT_TOKEN_TO_BE_REPLACED

A Guided Metta Meditation adapted from Kamala Masters by Mary Michal May I relax my heart and my body. Praise and blame, happiness and suffering, all arise and pass away in the spaciousness of metta and equanimity. Start with yourself.…
END_OF_DOCUMENT_TOKEN_TO_BE_REPLACED

Growing Compassion, Attention, Presence: the 4th Mindfulness Training From a talk by Walt Keough in 2012 Loving speech and deep listening are broader, wider practices than might first appear. Practice and effort are needed just to become ready to listen…
END_OF_DOCUMENT_TOKEN_TO_BE_REPLACED

Finding the Positives from a talk by Don Katz-March/April 2013 If, as the Second Mindfulness Training, “True Happiness”, tells us, “we already have more than enough conditions to be happy,” the questions becomes how do we learn to notice the…
END_OF_DOCUMENT_TOKEN_TO_BE_REPLACED

See All the News and Updates